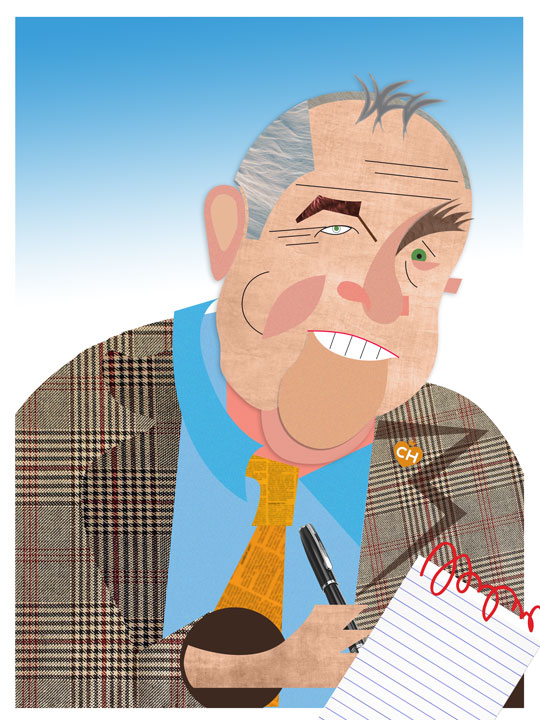 With his pen and voice, Rafael Prieto has fought for Charlotte’s immigrant community for two decades now. Proud of his roots, he also spreads Latin-American culture among those of us who live in the city through hundreds of events and, of course, with the publication of numerous stories.

He arrived as a journalist for the first time in 1993, a time in which news was not really generated in the city, and Hispanics were “something strange.” Even more than strange, the informative service in which he worked, “Canal de Noticias NBC,” was transmitted from the Queen City to a wide swath of Latin America, without Charlotteans being able to watch it.

The “Mijito,” as many call him in reciprocity to his affectionate greeting, remembers Charlotte as a “very conservative” city where Spanish was not spoken and “all the world’s churches” were found. Attending one of the first editions of the Latin American Festival is also in his memory, “something very small on the properties of CPCC,” along with the first Spanish publication El Boletín de la Coalición, and the first Spanish radio transmission.

His second adventure in Charlotte began in 2001 after working for years in Miami as a journalist for important mediums and platforms such as Telemundo, Univision.com and Televisa.

A sentimental relationship brought him back and ended up being “the world’s most horrible shipwreck,” as he calls it, but also inspired the impulse to become thoroughly involved in the Carolinas’ Hispanic community, which back then began to fall victim to racism bubbling to the surface around the nation.

Following that sentimental disaster, “for the first time I did not run,” he remembers. Upon similar experiences in Los Angeles and New York, cities in which he was also a news reporter, he decided to run from spite.

“This time I stayed because I found the Hispanic community very weak, very vulnerable,” he affirms.

He served as correspondent for the news agency EFE in North and South Carolina, and covered xenophobic incidents caused by the 9-11 attacks for the rest of the world.

“People began to see foreigners badly, and the logical victims were Hispanics,” he remembers.

He began to develop important ties with the main Latin-American organizations in the state and, through those connections, evince in written media the abuses and injustices that immigrant workers suffered.

His reticence to work in the Spanish local media, “because they did not abide by my standards,” unraveled itself and he took on the role of editorial director of the weekly publication Mi Gente, a function that allowed him to both communicate events and advocate for the rights of the immigrant community.

“It was a duty to be fighting for people who had no protection,” he asserts upon the implementation of 287g, the collaboration program between the Mecklenburg County Sheriff’s Office and U.S. Immigration and Customs Enforcement (ICE), which put Charlotte in a spotlight at a national level.

With the support of journalist Patricia Ortiz, week after week he followed up on the machinery of deportations — “the numbers were extremely high” — and several times confronted then Sheriff Jim Pendergraph with real facts on the effectiveness of expelling “criminals” from the country.

“In Pendergraph’s first press conference, along with congresswoman Sue Myrick, on 287g, they boasted about having deported 1,000 bandits,” he recalls. “We revealed that only 31 of them were truly criminals, they had committed aggravated felonies, the rest had been detained for traffic infractions or minor felonies.”

It was just one example of his fight and commitment to the undocumented community and on the influence he spread to his colleagues in the English-speaking media.

“Mi Gente demands an integral immigration reform to legalize the undocumented,” the cover of the publication read.

Compared to other printouts in Spanish, which mainly displayed positive things, reflected the business community, or were filled with international news, the newspaper Mi Gente, under the direction of Rafael Prieto, began to address the depths of issues that Latin Americans residing in the United States faced. The paper published the community’s true complaints.

Prieto significantly strengthened the coverage of local news, especially in the areas of immigration and police reports, without neglecting the areas of health and public services. In sports matters, in the “newspaper that thinks of you” (Mi Gente’s slogan), chronicles in Spanish were published for the first time on the Carolina Panthers, the Charlotte Bobcats (now Charlotte Hornets), and NASCAR races.

But even more importantly, Prieto made the general public see other faces of the United States immigration.

“It was not a newspaper, it was a cause,” he affirms proudly of the times in which he unloaded his passion in the weekly La Bitácora column.

His community service was recognized initially with José Martí award for Excellence in Publications from the National Association of Hispanic Publications (NAHP), the first such recognition for a North Carolina newspaper. He also served as a leader among Hispanic reporters of the region.

Adding to his social cause, the Charloteano journalist co-founded in 2015 the Committee of Patriotic Festivities and Traditions of Charlotte, to celebrate the independence of Ibero-American countries. He also held other events with the objective of giving a sense of national identity to Latin Americans residing in the Carolinas, to remember their culture and roots, and for those sentiments to be transmitted to newer generations.

Undoubtedly a figure of the history of Charlotte’s Latin American community, Rafael Prieto has left us unforgettable memories. He has been the chronicler, but also the protagonist. His fight continues and his mark remains among all of us who have had the good fortune of having him call us “mijo” or “mijita.